skip to main | skip to sidebar

Very thin, funny looking and knock-kneed, do you need more?
The Hemicloea belong to the family Gnaphosidae and the subfamily Hemicloeinae, of which there are currently 19 Hemicloea species, spread Australia wide. The two species I have noted around Esperance rarely exceed 2 cm in length (excluding legs) and are usually closer to 1 cm (less than half the size of most Huntsman Spiders), plus being very thin they are not very frightening, even for those with a spider phobia.
The arrangement of their legs is called laterigrade, which means the top of the leg is twisted 90 degrees and faces backwards. This gives the back legs a knock-kneed appearance, as they can touch behind the abdomen. Anyway, this twisted leg arrangement permits the spider to get down really low to squeeze into very small spaces. Not only that, it also allows it to move forwards, backwards and sideways.
A male Hemicloea species, indicated by the large palps near the mouth and next to the front legs. 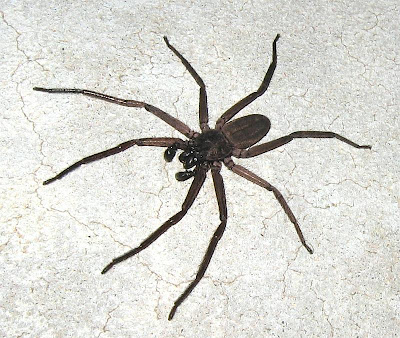 Normally these spiders live under rocks or loose tree bark, but sometimes they find a tiny crack in the walls of your house and hey presto, when you pick something up, out scuttles this funny looking spider in a complete mess and wondering what to do next.
I leave them alone, as they do no harm, but despite their funny appearance, they catch and eat other spiders, bugs, etc. So great to control any build-up of currently unseen less amusing species.

This is the female (bulkier and also shorter legs) feeding on another spider. 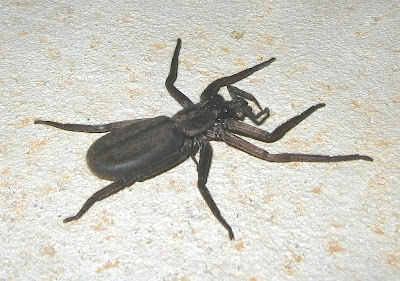 A close-up of the meal. 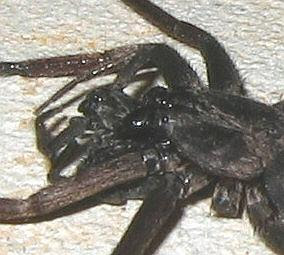 Below you can see how thin they are! Just a tiny crack is all they need to squeeze into.

Another male finishing off a beetle. 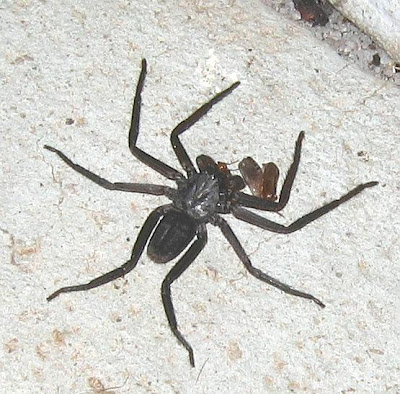 This fellow has a weird clownish appearance, with the front legs grossly out of proportion to the rest of it. 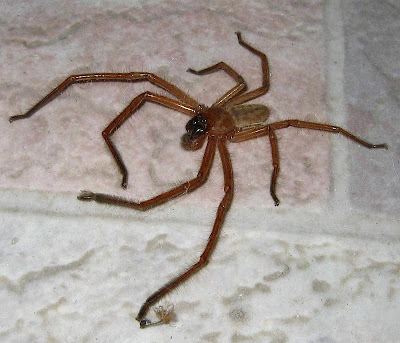 When I first saw it, I thought it may be one of the many Huntsman Spiders, but when keying it out from observable photographic features, I thought the flat abdomen placed it in the Hemicloeinae subfamily. Now there are two main genera here, the Hemicloea and the Hemicloeina, the latter recently revised. The difference between these groups is the arrangement of the spinnerets, which cannot be seen in these photos. So exactly where it lies I am not sure. If anyone out there can assist, your comments would be welcome.
Update March 2009: An error on my part because it is one of the Huntsman Spiders, but not a common one where I live, as this photo is the only observation I have made of this species. A distinctive feature that separates this spider from the Hemicloea is the long front legs as compared with the rear pair. 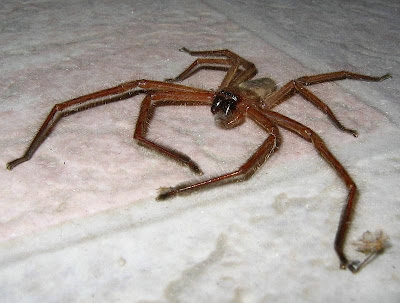 This spider also has the slender profile.

This is the only spider I have seen of this species. It is obviously a male, but has lost one of its palps, so probably there are ladies of this species (unknown to me) around too. 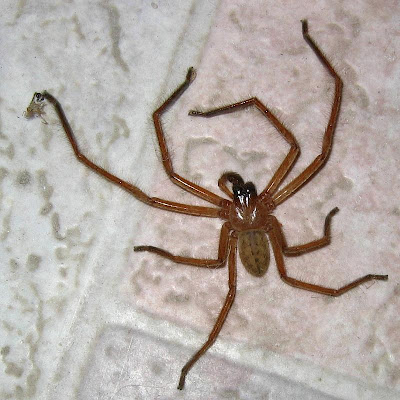 All these spiders are wandering hunters so don't build messy webs. Therefore, if you are fortunate to find one in your house, let it put a smile on your face then permit it to go about its business because they are doing you a great service.
Posted by WA at 3:00 pm

You live and learn, I always assumed these spiders (at least the east coast ones), to be a species of huntsman. Do huntsmen belong to Gnaphosidae?

Hi Woolly, no Huntsman belong to the family Sparassidae. However they have many features in common with Gnaphosidae including laterigrade legs.

>>>I always assumed these spiders (at least the east coast ones), to be a species of huntsman<<<

So did I, Peter. I'll be taking particular notice from now on to try to separate them from Huntsman. How interesting !

This a fascinating entry, Jack, and has piqued my curiosity in these comical looking (though creepy) spiders.

I enjoyed your photos very much, as usual. You know how to catch their best angle :)

This is a comment which I tried to post at least 3 times about 2 hours ago - it probably wouldn't be a great loss, if it didn't appear, but I like a "technical" challenge and now try again, since I see that woollybutt has gone through:

You really *do* defend creatures who - one would think - could only be loved by
their mothers ! ;-) Give me a lady bird - I know apparently it's cruel to other animals,
but at least it looks cute. The most frightening situation I have ever found myself in
(and I have been in some tight corners), was driving at night, on a stretch of road
where there was no possibility to stop the car, and just above me, out of the sunvisor
crawls a HUNTSMAN, and proceeds to walk to and fro, whilst I was starting to drive
like a maniac...

Very thin, funny looking and knock-kneed, do you need more?

But seriously: what other spiders do these above^^^ eat?

And, just in case my ignorance has not yet been obvious: are these, in layman's
parlance, "Huntsmen"?

And how do you recognise the sex of a spider?

Lovely work again.
Thanks and regards.

Hi MissAnthropy, glad you eventually got through. I find with these blogging sites, you must do everything exactly as specified, otherwise they don't work.

These spiders I believe have a very catholic diet regarding other spiders, ie if they can subdue them, they will.

The male spider has long prominent palps between the fangs and the front legs. If you check the photos above you can see this feature on a number of them. They also tend to be smaller, have longer legs and be less bulky.

Hope this answer your questions and hope you have fewer problems in getting through in future. You know what they say, 'practice makes perfect.' :)

Hi huntervalley, thanks for your interest. As you would appreciate, the more you get into these things, the more you find you don't know, but the more absorbing it all becomes

I posted a comment yesterday but it too must have got lost in transit.

I have been doing a bit of reading up on these odd spiders and note that the egg sac is a white disc-shaped web attached to bark, logs or rocks. There is little of that habitat at my home, so perhaps I have only seen huntsmen afterall, although I feel sure I have seen similar web constructions in my travels.

I also note that the female stays nearby to protect her eggs. I'll do a bit of scouting around if I find likely egg sacs when I'm in the bush, hoping to see and photograph one of these flat-as-a-pancake spiders.

Do you know if the female hangs around after the young have hatched to protect the spiderlings?

Hi Gaye, the egg-sacs are quite common in my area and can be found in all sorts of firm-surface cavities. Must admit, they are usually on their own with no sign of mum, so suspect there is little maternal care.

I liked this one, I also didn't realise they wren't huntsmans. The curse of the common name, I guess!

Do you get red backs in WA?

Hi Evan, glad you liked it. Yes we do have the Redback Spiders in WA, I think they are Australia wide. I have a number of photos and shall probably do a blog on them sometime, but might give the spiders a rest for a few weeks.

I checked your useful blog because I couldn't recall teh exact name of this spider (having just found one. I noticed your comment that no huntsmen belong to the family Sparassidae. Recently I sent a spider for identification to Mark Harvey at WAM. His reply was "The spider is a huntsman spider (family Sparassidae) of the genus Neosparassus or Olios, but most likely Neosparassus." So I am a bit confused.

There are three blogs that I manage, so if you find one with no recent posts, please try one of the others. They all deal exclusively with the flora and fauna of the Esperance region of Western Australia, so may also be of interest.

WA
An ardent nature lover who is happiest when in the bush. The object of this blog is to record the nature around me, particularly the unusual or rarely encountered flora and fauna. My photography is governed by my equipment that being a modest Canon A80 PowerShot Camera with standard lens. So I do not set out to portray subjects in high photographic detail, but to show them in an interesting pose and to highlight species characteristics.