skip to main | skip to sidebar

A big, fast and sociable reptile
I first encountered this skink when walking on a rocky outcrop near Albany, Western Australia. I never saw one, but heard them scuttle away into the bush upon my approach. At that stage I had not noticed any around the Esperance region, but one day a large female payed me a visit; liked what she saw and stayed. She was attracted to my concrete veranda and a metal skid I had placed on the ground with a northerly aspect, so plenty of sun, but not the hot afternoon sun. The skid was 6' long x 15" wide and 2" in height and had openings at both ends, as far as Mrs King was concerned it was perfect and she made it her home. She arrived in late autumn and shortly after produced two young who would rest on her back as she sunbaked as winter approached. She over-wintered with them in her new home.
King's Skink - Egernia kingii 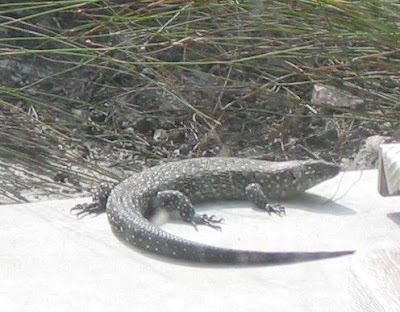 My apologises for the poor photography, but despite the three years she and numerous off-spring have lived here, they remain ever watchful and will disappear back under their skid if I stop at a window to watch them. So photos have all been taken from a distance and through a closed window, even then it was very difficult as they have excellent eyesight and are extremely shy.
The visiting male King's Skink and the slightly larger female 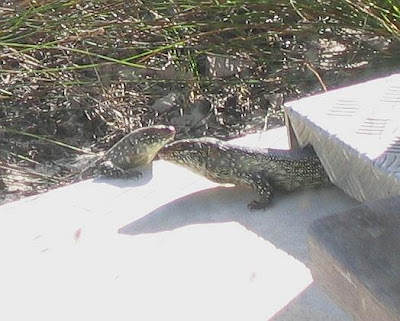 The large female is well over half a metre long and possibly as much as 600 mm in length. These lizards are live breeders and she has produced twins, twice a year, with the young usually remaining with her for around 12 months and sometimes even longer (she now has only a single annual litter of 4 or 5 young). She will come and go during the warmer weather, but is never away longer than 2-3 weeks. The male will visit occasionally, but does not remain long and is usually gone after a few days. However several generations living together are not unusual, although those nearing sexual maturity leave to presumably start their own families, nevertheless some do return for short periods and are accepted back into the family. Probably limited food and suitable accommodation determine the number that can remain for any length of time.
King's Skinks being sociable 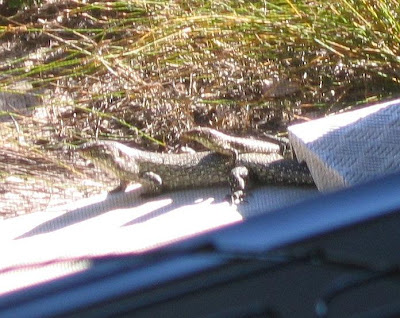 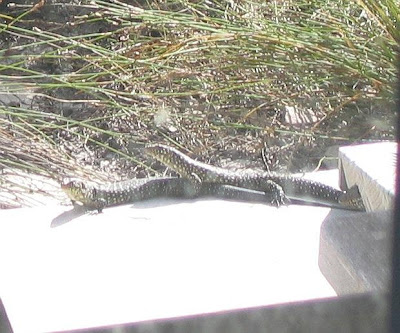 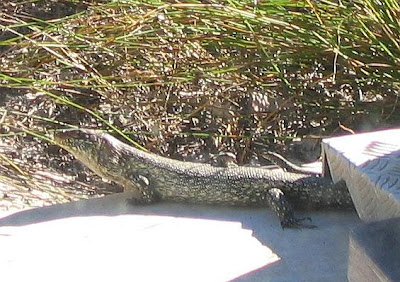 In a previous post of mine concerning another large skink, the Western Blue-tongued Lizard (click item 34 in right-hand column), I produced a photograph of an aboriginal lizard trap. On other granite outcrops in the region I have come across a number of these traps and believe they were primarily used to trap the King's Lizard, which is not only shy, but very fast and would have been difficult to catch by other means.
The speckled coloration is similar for the young and adults 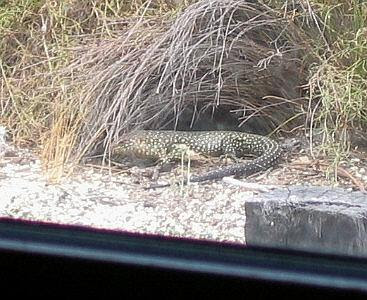 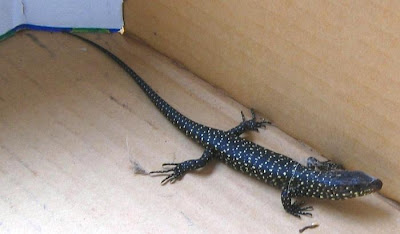 Despite the large size of these lizards, I have only seen them near their nest site and although they leave highly distinctive tracks when crossing sandy areas, I have not seen these elsewhere in the district, so presume these lizards are not common.
Typical tracks of the King's Skink, note the neat straight furrow 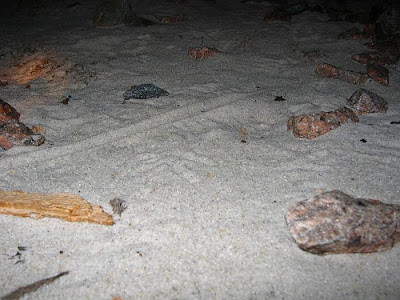 Great story! Do you have any pics of the youngsters basking with their mum? I looked for this species when I was over on Rottnest Island earlier this. Despite being told that it would be virtually impossible to not see any, I didn't see any. I think there was some guy called Murphy following me around.

Hi Stewart
Have a look at the fifth photo down and you will see the latest set of twins with their mum. Sometimes these young ones will sit on her head making a delightful composition, but alas they are much too fast for me to get a photo.

From my experiences with these lizards around Albany, I am not surprised you did not see them. They can be quite infuriating in that regard.

Thanks for your comments
Jack

"Have a look at the fifth photo down and you will see the latest set of twins with their mum."

Thanks - they were so tiny I didn't see them in that pic. Sounds like you need to set up the camera on a tripod in the appropriate location, leave it there so that the skinks become accustomed to it, then watch from afar and trigger the camera remotely when a good photo opportunity arises.

Stewart should have gone to Garden Island, its swarming with them on the grassed area, they are very tame. I live in the suburbs of Perth in Thornlie, on the bank of the Canning River, and am lucky to have two of these amazing creatures living a few meters from my house! As Jack said they love to live in tunnels and, the council has conveniently put a couple of 10cm wide pipes in the kerb which go underground down to the river bank, about 20m long. They like to bask on the road with their body half out of the pipe but retreat very quickly when approached. I was lucky to get a good look at another one living about 100m away. It was sitting on the grass next to the cycle path and let me come very close before dropping into the grate of a shallow storm drain. I thought it may have been trapped and went to have a look. It sat happily for ages before crawling into the small pipe leading from the drain, this pipe too came out on the river bank. Very cool!

Added to favourites and linked too as well... I'm off to have a look at the others, catch up next time.

Thanks, glad you found it informative.
Regards
WA

There are three blogs that I manage, so if you find one with no recent posts, please try one of the others. They all deal exclusively with the flora and fauna of the Esperance region of Western Australia, so may also be of interest.

WA
An ardent nature lover who is happiest when in the bush. The object of this blog is to record the nature around me, particularly the unusual or rarely encountered flora and fauna. My photography is governed by my equipment that being a modest Canon A80 PowerShot Camera with standard lens. So I do not set out to portray subjects in high photographic detail, but to show them in an interesting pose and to highlight species characteristics.